On 26th Jan 2006 (Republic day) I went to a missionary of orphan children. It was a nice Experience. 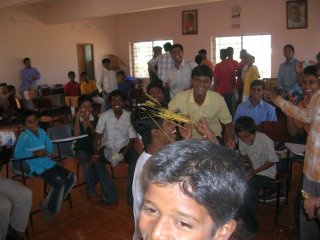 Posted by markandey at Tuesday, January 30, 2007 No comments:

These were the speakers at the conf.

Posted by markandey at Tuesday, January 23, 2007 No comments:

Marketing the Operating System as a Product

[Integrating my blogs into one blog: This post is copied from my other blog]
Think about the scenario when Application Software does not require the
Operating System to run upon. Will any one purchase any operating system
for just shake of the viewing the file on his Hard Disk, for listing the
Hardware attached to his computer? In the desktop market no one will
spend even a single penny for software such as the Operating System
which only facilitates the Application software.

Let's talk about the Microsoft's way of marketing the Operating System.
Microsoft is too rich in bringing the first 2 parameters. I mean the
Microsoft new Operating System is will backward compatible than anyone
in the market. Microsoft is also clever enough to bring the latest API
and development environment in the market. But due to some security
related concern of Microsoft the new OS is not good in avoiding the
Non-Irritating User Dialogs.
Posted by markandey at Tuesday, January 02, 2007 No comments: